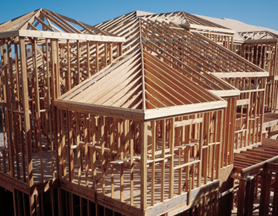 Douglas Fir (DF) is often the standard against which all other framing species are measured. Its strength combined with a superior strength-to-weight ratio, high specific gravity (for excellent nail and metal truss plate-holding capability), excellent dimensional stability (giving "green" DF products the ability to season well in service), the moderate decay resistance of its heartwood, and documented excellent performance record against strong forces resulting from winds, storms and earthquakes, have given Douglas Fir its reputation. It is also tight knotted and close grained, adding the bonus of beauty to its structural capabilities. Color, grain pattern, knot size and type are addressed in the rules for appearance grades.

Douglas Fir is the major species produced in the West, with more volume shipped than any other species, and its sterling performance history is recognized the world over. It is abundant and widely available in second and third-growth stands yielding products in multiple grade classifications: dimension and other framing products, engineered structural products such as MSR, finger-jointed, and glu-laminated products, high (clear) to low (economy) grade appearance products, and industrial and specialty grades. DF doors, manufactured from products in the Factory & Shop grade classification, are renowned for their beauty and performance.

Douglas Fir's light rosy color is set off by its remarkably straight and handsome grain pattern. Sapwood is white to pale yellow; heartwood is russet with high contrast between the springwood and summerwood. While similar, Western Larch is slightly darker in color, with the heartwood being a reddish brown and the sapwood a straw brown.

Douglas Fir grows throughout Western forests with the most abundant region being in the coastal climates of Oregon, Washington and northern California. In the Inland Region, east of the crest of the Cascade Mountains, Douglas Fir and Western Larch often grow in intermixed stands. Coastal and Inland Douglas Fir and Western Larch share similar structural performance characteristics and are often combined in dimension lumber structural products. 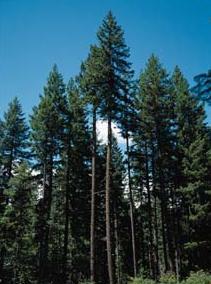